“The sensors, manufactured and calibrated in early 2017, have been running continuously for five years,” according to the company. “During this period there has been no additional calibration, and there has been no deterioration or drift, and despite regular exposure to combustible gases, the MPS sensors’ accuracy remains within specifications.”

The family includes parts to detect from 0 to 100% LEL (lower explosive limit) across 19 flammable gases and six refrigerant gases including: 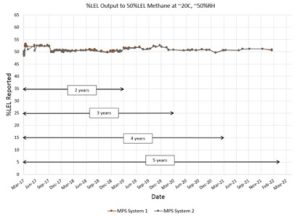 One type of sensor was tested over five years, but the results apparently read across the others.

“This was the flammable sensor used in these tests, but the MPS hardware is exactly the same in the flammable, methane and refrigerant versions,” NevadaNano v-p of Marketing Gary Collins told Electronics Weekly. “The devices were tested at an independent manufacturer on the East coast of the US for two years, and then for the last three years at the NevadaNano facility.”

How do they work?

Gas defuses through a mesh screen into a chamber which holds a MEMS sensor module.

From thermal information gained, the energy required to heat the sample can be determined – compensated by environmental temperature, pressure and humidity figures measured simultaneously by other sensors within the device.

This figure, corrected for gas category, is used to produce the output value.

The company describes these sensors as ‘inherently immune to drift, decay or poisoning’ and, based on accelerated life testing, predicts over 10 years life without the need for calibration.